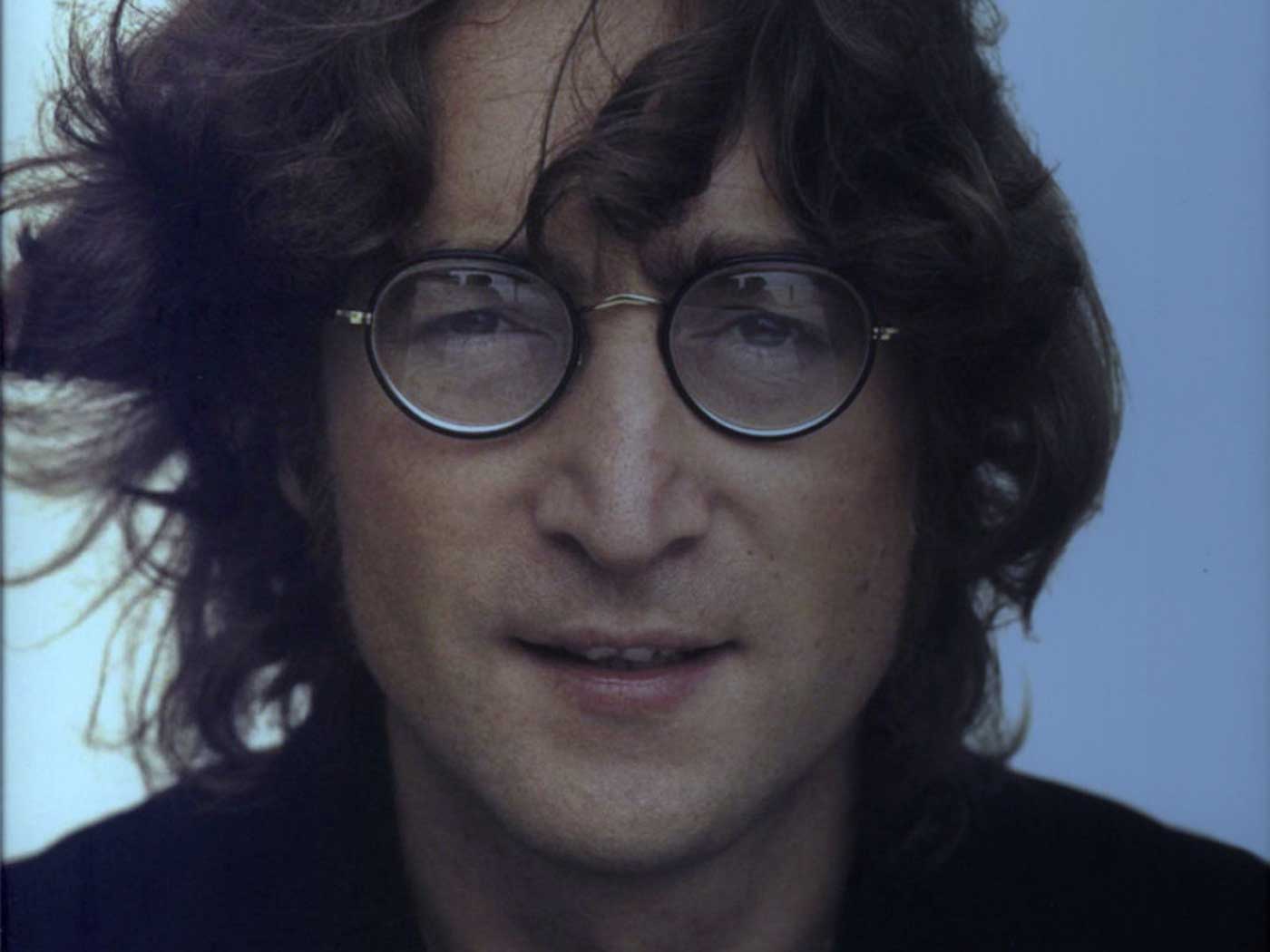 In this article I show you my analysis of my solo piano arrangement of Imagine by John Lennon, one of my favorite pop songs!

How I arranged the song Imagine for Solo Piano

I thought it might interest you how this arrangement came about. I actually performed the piece by memory (having played it a thousand times at gigs), and transcribed it after-the-fact to figure out what I played exactly. Still, the performance was mostly improvised.
To be totally honest though, I first played through it a couple of times to try out different things before I hit the record button. For example, the added changes towards the end of the piece I worked out before I recorded it. Everything else however came naturally.

Tip: I recommend you record and transcribe yourself as often as you can. It is the best way to find out about what you still have to work on. Imagine you are listening to someone else. How would you grade her/his playing? What do you like, what do you dislike about it.

What I changed and didn’t change

Tip: Before you read on I recommend you listen to the original recording!

As an arranger I always look for ways how I can change things without destroying the integrity of the song. This means I leave the melody mostly as is (with the exception of some rhythmic changes), while embellishing the chord changes. The feel of the arrangement may also differ somewhat from the original, without destroying the overall mood.

The accompaniment John chose for Imagine is very simple yet very important. In fact, one recognizes the song after just hearing the piano intro for two seconds. An indication of John’s genius. You can see below what he played on the recording.

Although I love his piano intro (which he keeps going throughout the song by only adjusting it to fit the chord changes) I like adding the major seventh to the C and F chord occasionally to give it a more jazzy sound.
I also added embellishments known from country music and other popular music styles. I also added syncopation to add a little more forward motion. I like to take these kind of liberties especially when I create a solo piano version of vocal driven songs.

My version of the intro

As you may have noticed, I also played it up an octave from the original. This actually happened more my accident. But I like it after all. It makes it a little brighter sounding.

In bar 3-4 you can clearly see the syncopated rhythm I have added to funk it up a little. By the way, why don’t you try sight-reading bar 3 and 4. If you hit it right the first time you are a sight-reading genius!

Please note: The red notes indicate fill-ins in the accompaniment. Those notes do not belong to the melody. Measure 10 shows the clever fill that John plays during the entire intro. This fill ends on the note D, which is the ninth of the C major chord. A very nice color tone that gives the accompaniment its special flavor.

A note on the Sustain Pedal use

When playing this arrangement it is imperative that we make good use of the sustain pedal, maybe even the sostenuto pedal. This is especially important to over scratching our fingers in the left hand. I created an entire tutorial on just the use of the piano pedals.

The left hand figure in Verse 1

The left hand uses two techniques. First, it is based on tenths. This is very common in jazz. It is a much nicer sound when we transpose the third of a C major triad in root position up a third.
Second, the rhythm is often a dotted 8th followed by a 16th note value, which adds drive to the accompaniment. This is often used in latin rhythms such as the bossa nova.

The right hand in Verse 1

Obviously the main job of the right hand is to perform the melody. I often harmonize the melody with at least 1 chordal tone to make it sound fuller. When the melody has a hold I play short fills (in red).

As an arranger I never repeat the same section the exact same way. For example, in Verse 2 of my Imagine arrangement I do an answer-response in the melody by transposing it up an octave. This ads a new element to the arrangement. In addition to transposing the responds (bar 11-12, 15-16), I also harmonize it in 6ths, and by adding 4 note close position chords at the end I increase the energy which makes the second verse stronger than the first one. A perfect way to lead up into the chorus. 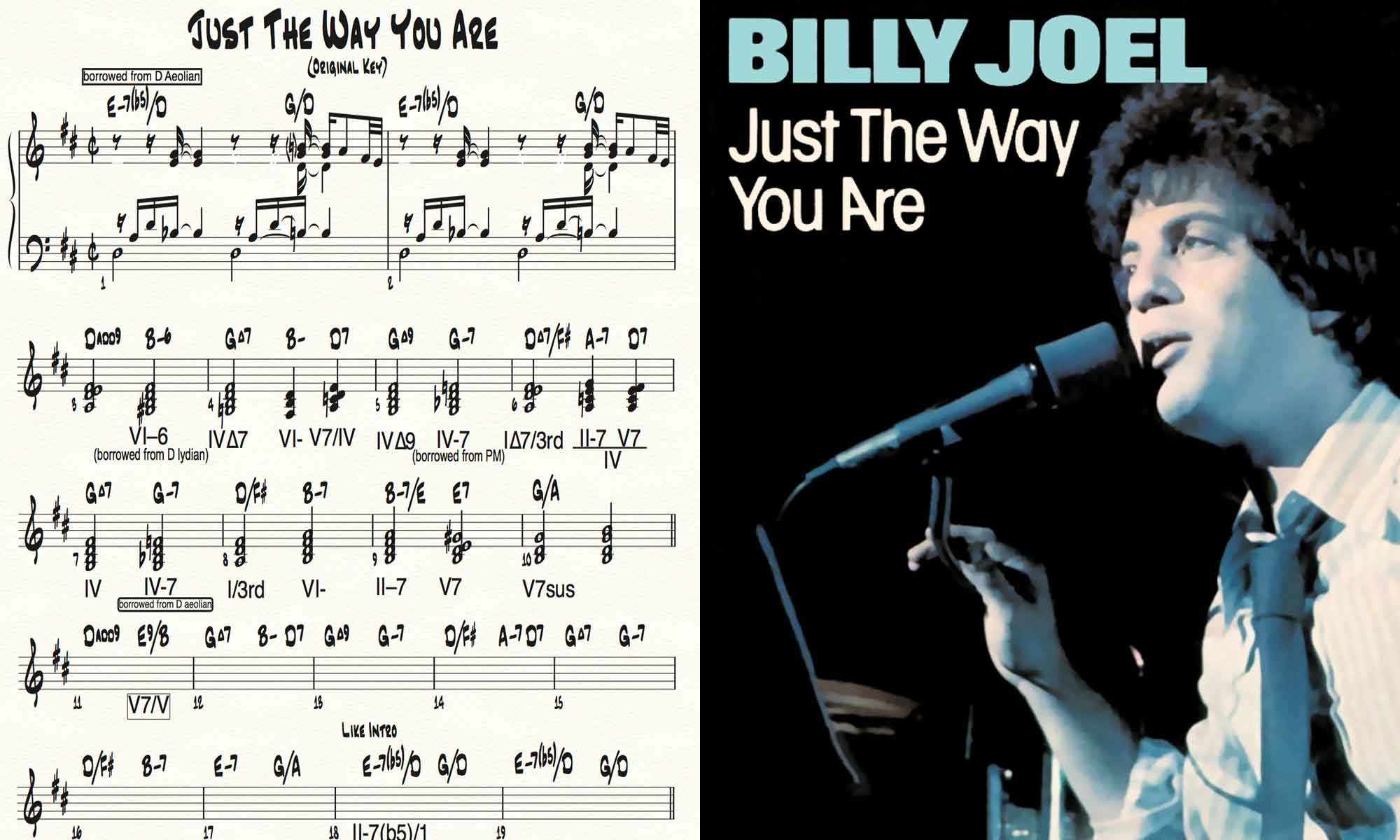 Just The Way You Are is a famous pop ballad by Billy Joel that features a beautiful chord progression that is definitely worth exploring. The quality and function of the chords are very jazzy and somewhat unusually sophisticated for a pop song. This means that there is a lot we can learn from, especially those keyboardists that want to learn how to play more colorful and harmonically sophisticated pop styles.

I created the first video in this post for my secondary piano students at Columbia College Chicago years ago. It show how to play a relatively simple accompaniment over those chord changes. The beauty of it is,  that  you can apply the same technique to many other pop ballads. This is really great news for singers who want to accompaniment themselves playing this kind of music, but are not real pianists, if you know what I mean.

Below is my video tutorial that demonstrates how to play the intro and an easy accompaniment that get’s you through the changes.  I suggest you watch it first before you read on. 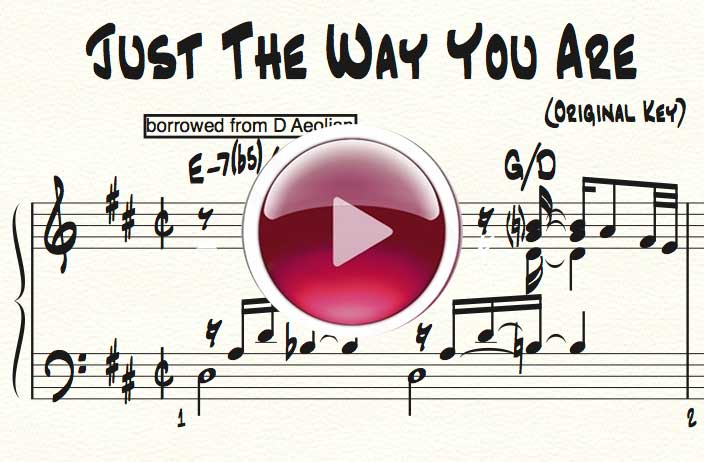 I am in the process of creating the second video to explain in detail how you can learn to play this kind of piano accompaniment. So please check back soon. 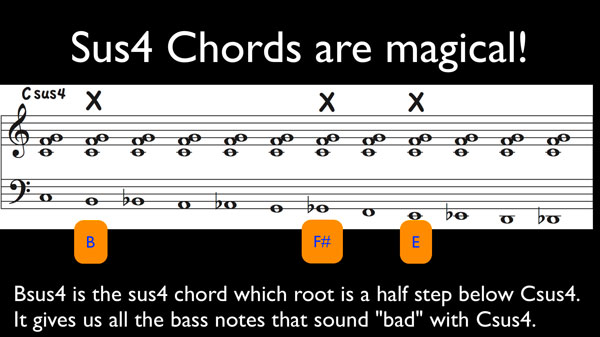 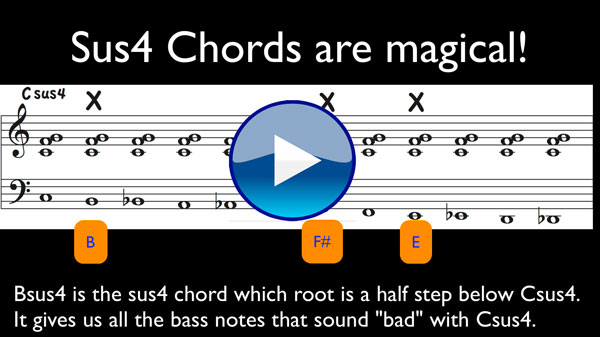 I just finished the introductory video tutorial above about sus4 chords. It shows me jamming on the keyboard over a Csus4 chord, and afterwards explaining how you can do the same by following a few simple musical ideas.

I am in the process of adding a lot of great information to this post soon. So be sure to check back soon.

Sus4 chords are amazing tools for pop musicians. Especially, because you can play 9 different pitches in the bass with any given bass note, creating really interesting sounding harmony.  To demonstrate this I created a chord table that shows all possible chords we get when we use different bass notes for Csus4.

Pick your Topic of Interest